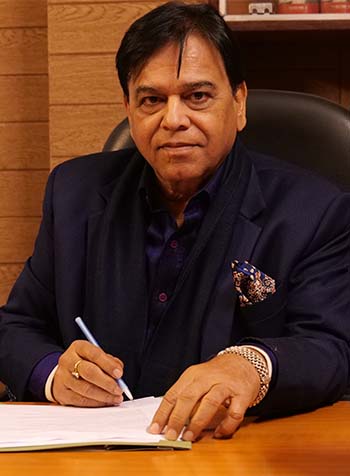 The Founder and President of the firm, Mr. Alok Sinha has qualified law in 1973 and he is practicing Advocate in Hon’ble Supreme Court of India  (The Apex Judicial Body of India).

Mr. Sinha is having 33 years of experience in the field of law. He is a lawyer of repute and stature and dealt with most reputed companies of India like, Tata, HCL, Moser Baer, DLF, BPL, EROS, HP, OMAXE, VOLTAS, ExxonMobil, etc. to name a few.  Various multinationals seek his expert opinion on various important matters. Therefore, Mr. Sinha is actively involved in advising numerous multinational clients on various aspects of their investments in India.

Mr. Sinha has a vast experience in the areas of Regulatory approvals, corporate advisory, joint ventures, foreign collaborations, Project Finance, Infrastructure Projects, and Employment Laws etc. He has been very closely involved with infrastructure project deals and has played a pivotal role in the area of Power and Airports projects. He possesses special expertise in assisting foreign clients on their entry strategy and has been instrumental in advising numerous multinational corporations on setting up a business presence in India and providing continuous legal support to various clients on Business Law issues. Mr. Sinha is deeply involved in foreign investments at the top level and therefore ICEX (The investment body of Spain) itself has contacted ASC Solicitors & Advocates for legal support to materialize the deal. Malta Enterprise (Govt. body of Malta for bringing investments in Malta) met personally to divert investments to their country in the sector of Healthcare and Biotech. Top Management Consortium, Pune has approached Mr. Sinha to support and bring investments in Pune.

Mr. Sinha’s work is appreciated and supported by NITI Aayog (Planning Commission of India, an apex body) and International Labour Organisation (A UN agency), and also by other Ministries, forum, and Government Authorities at various ventures / conferences organized by the Bhartiya Society under the Presidentship of Mr. Alok Sinha. They assured to provide all their support in the field of Investment for the upliftment of our country India.